„It recently came to our attention that the Swiss band UNDERGOD just released a new album featuring a song called „Killove“, which bears a lot of similarity with our song „Primitive“ (same guitar riff in the same key, same synth riff, same structure/tempo, and even some common lyrics). Listening to other songs by this band, it became obvious that these guys know how to „inspire themselves“ of other bands – RAMMSTEIN, MINISTRY, MARRILYN MANSON, FILTER… They told us this is all a coincidence. Maybe it is. And maybe God exists, too.
The case is now in the hands of the copyright societies, and may end in the hands of justice. We’re not doing this for the money: UNDERGOD probably doesn’t sell enough records to pay for their guitar strings. And we’re not doing this because we feel original or innovative: A lot of our songs can be heard as tributes to the artists we love, with some lyrical quotes and direct references (IGGY POP). But sometimes the limit between tribute/inspiration and pure robbery is crossed, and that seems to be the case.
PUNISH YOURSELF“ 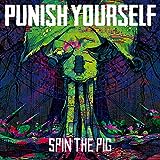 Punish Yourself - Holiday in Guadalajarabei amazon24,00 €