„Today an 18-year old man shot seven people in a high school massacre in Tuusula, Finland. The killer referred to himself as „Sturmgeist89“ on YouTube. Sturmgeist is not only the name of my band, but also of a character in the video game „Medal of Honor“. As of yet, it is not established wherefrom the murderer took the name. Understandably, journalists keep calling me, eager to prove a link between my band and the massacre. However, as an artist, I can neither control the actions of my fans nor be held responsible for them.

It is my firm conviction that if somebody wishes to go down as the cause of a massacre like that in Tuusula, explanations beyond music must be sought. In an interview with the Oslo-based newspaper Dagbladet today I argue that although extreme metal as a genre deals with topics such as isolation, misanthropy and despair, blaming the musicians is both wrong and unfair. It is people that kill people. Not music.

Extreme metal has a potential both for social comment and personal katharsis, given its dealing with problems ordinarily shunned by mainstream society: suicide, madness, pollution, violence, warfare and drug abuse all occur regularly in extreme metal lyrics, mostly subject to critical scrutiny.

I do recall how lonely and isolated I felt as a teenager, how strong an impact music had on my life. Extreme metal helped me channel my aggression in a constructive way; where Slayer’s album „Seasons in the Abyss“ described the psychology of a mass murderer, Cannibal Corpse’s „The Bleeding“ gave graphic accounts of extreme violence. Even though I adored both albums, I did not go out and kill people.

Knowing the boundary between fiction and reality was always a prerequisite for dealing with dark matters in music, literature, film and video games. It seems obvious that the Tuusula murderer was ignorant about this boundary.

The lyrics of Sturmgeist do contain topics both sinister and martial. Topics such as WWI & WWII („Triumph“, „Enigma“), the war in Iraq („Shock & Awe“, „Iron Hammer“), Viking battle („Army of Odin“), a victim exerting revenge on his tormentor („Ruger“). I readily admit it. Saying anything else would not only be a blatant lie; worse, it would be betraying the music I love and believe in.

I am most shocked by the tragic event in Finland, and mourn the victims of the crime. I believe that the victims could have been alive today, if youngsters on the edge were given more attention by the proper instances. I extend my compassion and my condolences to the families of the deceased.“ 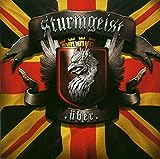 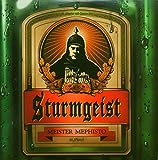