Deutsche Rating Groups haben SPV, den deutschen Vertriebspartner von Relapse Records, gezwungen, den Vertrieb für EXHUMEDs neues Album „Anatomy Is Destiny“ einzustellen. Beanstandet wurden die Bandfotos im Booklet von „Anatomy Is Destiny“, die in ihrer Darstellung des Todes zu realistisch und grausam für die Masse seien. EXHUMED-Sänger/Gitarrist Matt Harvey kommentiert dies so: „Censorshit…here we go again. Well, censorship is nothing new to EXHUMED, especially in Germany. It never fails that someone there is hell-bent on filtering what people can see and hear. Ultimately, despite every effort on the part of both EXHUMED and Relapse to release Anatomy Is Destiny the way it was intended to be released, outside pressure from government ratings groups has blocked our record from being distributed in it’s current form. The criticism leveled at the artwork on Anatomy is Destiny is that it was „far too realistic“. The fact that we are encountering this is nothing but a sign that we’re doing something right — challenging the boundaries of morality and provoking an extreme reaction. It’s just a pity that all the Teutonic Necromaniacs won’t be able to experience it firsthand. Our aesthetic is meant to provoke a reaction, and hopefully to confront the absurdity and hypocrisy of western morality – but ultimately we are a Metal band whose primary concern is just to play Metal. It is not our intent to incite the record buying public into committing acts of violence or homicide, but hopefully to incite them to think for a moment about this disgusting planet we’re all mired in and the finite and fleeting nature of human existence. Apparently, what we are conveying is considered „a threat“ to someone’s way of thinking and way of life. And we wouldn’t have it any other way. We have decided that the most important thing is that all the German Slaughtercultists actually get the record in their hands. Unfortunately, the album will reach all of the Necromaniacs in a butchered, truncated and amputated form, leaving the original intent of the album booklet as maimed and mutilated as the subjects of our songs. We have painstakingly created the best possible artwork and lyrixxx for our fans, only to have them consumed by petty, bureaucratic morality-mongering. This is precisely the kind of confrontation that is at the core of what we do- the ideas of the accepted „norm“ meeting the grisly realities of our world- the cold, hard truth of the grave. And truth isn’t pretty, especially the way we present it. For those of you who aren’t content to see the album the way that „they“ want you to, I encourage you to contact Relapse Records Europe (relapseeurope@relapse.com). See all of you in the morgue. On behalf of EXHUMED / Matt Harvey“ Eine neue Version von „Anatomy Is Destiny“ ohne die Bandfotos und Texte Wird in Deutschland Anfang Oktober erscheinen. 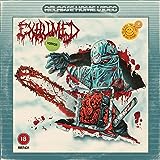 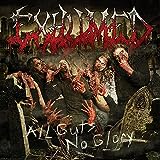 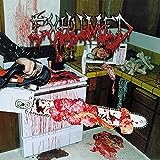