Times Online: What was the turning point in your guitar career?

Iommi: Before BLACK SABBATH I used to work in a sheet metal factory. One day as I put my hand in this press, it slammed down and capped my fingers. I pulled my hand back, which pulled the ends off. I didn’t think I’d play again. I was so upset. Later, a manager bought me a record by Django Reinhardt [three-fingered jazz icon] and that’s what really got me into playing again.

Times Online: How did the accident affect your playing?

Iommi: It absolutely changed my style. I had to find different ways of playing chords and making them sound big. The hospital advised me to stop playing but I wouldn’t accept that, so I had to devise a way of playing comfortably. I made these thimbles out of a Fairy Liquid bottle I’d melted down and shaped around my fingers. It was a bit of a crude method but it worked for me.

Times Online: You were also briefly in JETHRO TULL. What did that teach you?

Iommi: What I learnt was to have a bit more authority and discipline. So after that I laid this regime down with SABBATH, to start rehearsals at 10 in the morning. Ozzy and the others were like „Eh?!“

Times Online: Was there much competition in those days between bands?

Iommi: There was a lot of competing in those days. I remember making a point of going to see Clapton, and Ian Anderson [JETHRO TULL lead singer] saying to me: „Well, what do you think of your hero now, then?“ So obviously Clapton didn’t impress him very much!

Times Online: Didn’t the increasing excess break down the discipline?

Iommi: As the albums went on we were going to exotic places to record and, or course, the drug influence came in. After the release of „Vol. IV“, we went to L.A. to record the next. That was when I had writer’s block and we were around all the drug dealers under the sun. It was just disastrous.

Times Online: So the setting affected the recording?

Iommi: After the L.A. experience, we packed up, went to a castle in Wales and set up all the gear in the dungeons. Everything started happening again.

Times Online: Do you have many riffs that you never used?

Iommi: I’ve got bloody cupboards full. It’s only in the past year that I’ve given the guy who works for me the horrible job of transferring the ones on cassette from years ago on to CD. He was absolutely thrilled about that.

Times Online: Any advice for an aspiring heavy-rock guitarist?

Iommi: Get a lawyer! Seriously, though, don’t follow trends. Believe in what you’re doing and stick to it. 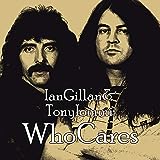 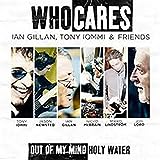 WhoCares - Out of My Mind, Holy Waterbei amazon8,49 €
Weitere Angebote »