On his new state of mind:

„There was a time in the middle of my depression when I basically stopped eating. I wasn’t doing it to lose weight or anything — I just forgot to eat. I got down to 145 pounds, which is pretty skinny. I’m 6’3″. And then I read an article in a magazine by a doctor talking about his experiences with anorexia, and everything started to make sense — the aches in the joints, the headaches, the way my bones felt as if I could bend them with my hands. I started eating again. That was much better.“

„I was in my second week of rehab when another singer from a well-known band walked in with a dazed look on his face. I wondered for a second whether I had died, whether this was the lobby where the new guests walked in, and when I was going to meet Elvis.“

„I had the quintessential rock & roll rehab experience a few weeks in. I was picked up from the clinic, ushered into a limo and driven to the set of AUDIOSLAVE’s ‚Cochise‘ video, where I was lifted onto a nine-story framework, and I started lip-synching the song, still dazed from the incongruity of it all. I looked around: RAGE AGAINST THE MACHINE was playing somewhere below and fireworks exploded everywhere around me. I couldn’t help thinking, ‚Am I really supposed to be here?'“

„I started out doing absolutely the lowest job in the food business. When I was 17, I cleaned up slime for the legendary fish wholesaler Jon Rowley. And I mean that literally — there was one guy doing the filleting, and the place was crusted with fish guts and scales and slime. Sometimes when we got skate in, it was coated with two inches of solid slime, sticky and oozing and almost impossible to clean. One day, Jon brought in this special powder to clean out the walk-in refrigerator. He scattered it along the walls and sprinkled it with water, and it produced this caustic gas that was supposed to loosen the goo from the walls. It was my job to go in and clean the place out, but I took one whiff and almost passed out. To this day, I’m still not sure who ended up cleaning out the refrigerator.“

On his second wife:

„I really had to woo Vicky the old fashioned way. It was a new experience for me: dinner dates, flowers, sweet nothings … She is so beautiful, so together. And her brother is the jealous, protective type, and he has a temper. He’s had his nose broken at least a dozen times.“

„This is going to sound really bad, but I really love my iPod. It’s a great way to listen to music. And I know it’s driving the record companies crazy because suddenly it seems as if there’s no need for them anymore. Maybe there is no real need. This is AUDIOSLAVE’s last contracted album, and we’re not sure what we’re going to do next: sign another contract, release the records ourselves or just put songs out on the Internet. It’s an interesting question. These are interesting times.“ 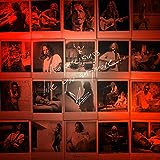 Chris Cornell - No One Sings Like You Anymorebei amazon14,99 €

Chris Cornell - No One Sings Like You Anymore [Vinyl LP]bei amazon24,99 €
Weitere Angebote »