„It’s time for me to left the band. This wasn’t easy decision for me but that’s what life is, decisions. Some of them are easy to make, some of them are not. I don’t have that much time, money nor energy for the band anymore that playing in a band and being a member of a band would require to. It’s not fair to other band members either that one is hanging along with half impression while rest of the band loads themselves for the band 110 percently and I don’t want to slow down the progress of Crystalic as a band neither guys of accomplishing their dream.

People change while the years go by and I don’t feel that playing guitar in a band is the biggest thing for me in life anymore. Somehow my interest towards music has fade little by little a long time by now so I’m going to end band stuffs entirely, at least for now. I will be Crystalic.net webmaster still so I won’t be completely gone.

We have been friends with the guys before I joined to Crystalic and we will be friends from now on. So no bad blood between us. Thanks for amazing moments and for hard times as well guys. You guys rule and I wish the very best future for Crystalic. And guys, let the metal flow!“ 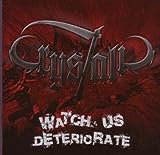