With „Hijo Perddido“, SHADED ENMITY have just released another ferocious piece of Melodic Death Metal. Why are these guys to angry? And why are record labels so deaf and dumb? Joe Nurre (v/g) tried to come with some answers for us.

Hello there! How is Washington this time of the year?

Hey, and first off thanks so much for the coverage that you have given SHADED ENMITY over the past couple years with www.metal.de.

Washington is great right now, I don’t like hot weather and it has been raining and very gray here and I’m happy with that.

„Hijo Perdido“ is your third album, it’s a great piece of work once more, but still you are releasing it on your own. Why? Don’t you want a label or are labels just too stupid?

I can’t tell you how hard it has been for us to get any exposure here in the United States. Most labels do not give us the time of day because of the style of music that we play. I sent our 2009 album „Like Prayers on Deaf Ears“ to 40 labels in the United States and I didn’t get one response. Not a single response. We have had one positive response from Season of Mist Records, however, they told me that they had no room in the budget right now for a new band. I don’t necessarily share the opinion of a lot of people that think you can „just do it yourself“ and the people who think that you don’t need a record label. Because quite honestly, in this day in age, I believe you need to be on a record label in order for your band to be somewhat successful because there are a million bands out there with myspace, and facebook and reverbnation pages that for a band to get noticed out of that is extremely difficult. If we were able to negotiate the right deal with the right label, we would definitely like that.

In your opinion and experience, is the never-ending Melodic Death Metal boom rather helping or hurting bands that basically play MeloDeath, but not exactly the standard formula? Is it opening doors or limiting creativity?

I would have to say that the never ending „Melodic death boom“ has really been struggling for originality and creativity the past few years. I used to listen to a lot of melodic death metal. Now, I consider a lot of it to be „cookie cutter“ or „recycled riffs“ that are perhaps slightly altered from an AT THE GATES or IN FLAMES album. A lot of people consider us to be Melodic Death and in a way, that is true, but it also is not. We play death metal with melody, however CHILDREN OF BODOM is also considered Melodic Death Metal, and I don’t believe our two bands fit in the same genre. More people call us Melodic Black Metal, but I quite frankly couldn’t care less about genres. A lot of my inspiration used to come from bands like ARCH ENEMY, ETERNAL TEARS OF SORROW, IN FLAMES, AMON AMARTH, however nowadays my inspiration comes from Reggae, Jazz, and even a singer such as ADELE. I enjoy listening to a good female singer.

It’s now been two years or so since „Like Prayers…“. In hindsight, how happy are you with that album? How has it been received by the press and by the public? How much have you done in terms of live shows to promote the album? And a very delicate question: How many units can a band like SHADED ENMITY sell without professional label help (feel free to ignore this one if it’s too intrusive)? A very persistent urban legend has it that metalheads are still buying records. Can you confirm this?

„Like Prayers on Deaf Ears“ was a very special album for me. I was going through a very difficult period of my life, and the music just flowed from me and I remember being so relieved when the album was finally out. In hindsight, i wish the production was a little better, but I was funding the entire project and spending thousands of dollars of my own money to record this album that i felt very strongly about. To be quite honest with you, I have not seen or read one interview from here in America. That sucks. There is an Italian webzine that has been very good to us with a review, and of course metal.de. I get many many emails from over in Europe (mainly Germany) saying how much the band means to them, and how much they enjoy the music. That is a great reason to get up in the morning and open your email and you have some guy in a different country telling you how much your band means to him. It gives inspiration.

We have done maybe 20-30 shows since „Like Prayers on Deaf Ears“ and they have all been in Washington State, except for one in Oregon. We would love to be able to go over to Europe as that is where our target audience is, haha.

To answer the last question, I made the mistake of pressing 1,000 units of „Like Prayers on Deaf Ears“ and we have probably sold 300 and I have given away many.  It has taken us since 2009 to do that. However we are still getting slow CD sales through cdbaby.com as well. To even further answer your question, most of the CDs that I have sold have been to overseas. In fact, 90%. Just the fact that we are an independent band and even have people that will buy our music, is great and I am happy with that.

Now, what do you want to tell us about the new album? (insert promo speech here, hehe)

I am really happy with the way this album turned out, the lyrical content is a lot darker than the last album and so are the songs, and Simon really went above and beyond the call of duty in performing his drum parts. He has such dedication to his instrument that it shows in his playing. We were able to achieve a lot better level of production this time around, and the drums sound a lot heavier. The songs are more aggressive, and we have a lot of different melodies going on in the music. Where do you, from an insider’s point of view, see the main differences between Prayers and Hijo? How much of an impact did the line-up changes have?

Probably the biggest difference between „Hijo“ and our last album would be the production quality and the addition of several guitar solos. Our engineer Aaron Smith did such an amazing job mixing this record. Of course we had also been playing together a little longer as a band, and I think that obviously shows. My songwriting obviously matured a bit from „Like Prayers…“ but I still kept things in the same style.

The lineup changes didn’t affect the band at all. SHADED ENMITY is Myself and Simon Dorfman. I handle 100% of the song writing.  The only difference on „Hijo“ was we had Zach Palmer play bass for the session and he did a great job. Came in and nailed his takes. Rob left the band shortly after we recorded „Hijo“ and so it was just a matter of finding a guitar player and bass player for live shows that could learn the parts. 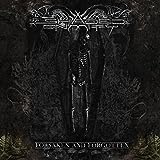