„I believe THREAT SIGNAL owes you an explanation regarding member changes. This is what’s been going on… First, I would like to say, every former member of the band CHOSE to leave for their own personal reasons. And I am happy the way the band has turned out in the long run. We sound better than ever and we’re having a great time together! Early in the summer Kyle (McKnight, guitar) informed me that he no longer wanted to continue his career with the band. The main reason was touring, and not wanting to be away from home, even to play an hour away… We cancelled over 60 shows because of this. I was extremely disappointed. He then wanted me to post a statement saying he had given up on music, which I didn’t post, because I don’t believe it to be true. I, on the other hand, will never turn my back on my passion, my friends, my fans, or myself. I started THREAT SIGNAL, and I will die with THREAT SIGNAL. I’ve recorded and produced every song we’ve ever done, wrote music, and written all lyrics and melodies, so I’m totally confident in moving forward with the band. We have recently recruited a young shredder from Texas, Travis Montgomery. He’s one of the best young players I’ve ever seen. Oh, and he’s also killer at guitar… His style fits in perfectly with what THREAT SIGNAL has created, and you will shit when you hear him play on the next album. You can see him in the tour blog videos. We are extremely excited about the new material we’ve been writing together, and I can’t wait to release the next album. We are hoping to be in the studio by spring 2008. So with all that said, I would like to thank everyone who has stuck with THREAT SIGNAL and supported us through the good and bad times. Life is a fucked up ride, but everything happens for a reason and we only get stronger.“ 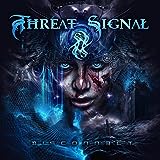