This is what’s happening. The band was offered to be part of the W.A.S.P./ L.A GUNS/STEPHEN PEARCY tour and when put to the test of a real tour on the table, the band had to turn it down and take a hard look at what we want to do from this point. Most everyone in the band has finally a bit of security on the home front. We have played as many Southwest U.S. shows in the last six years as we possibly could have without degrading the bands impact. We still have a great love for writing and recording music, even Eric [A.K., vocals]. We will write and record as long as we are signed. We just spent a long six weeks in intense performance mode doing this new record, after a relatively long writing and rehearsal stretch, and we are a little fried, to be expected. Time will do its thing as it always does and we will recharge and see where we are. FLOTSAM has a life of its own, you can’t kill this motherfucker.“ 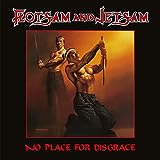 Flotsam and Jetsam - No Place for Disgrace [Vinyl LP]bei amazon42,75 €