„It’s official. I have quit VICIOUS RUMORS due to unfair conditions and very shady acts from certain members (of the) band… this may come to no surprise to many of you … this decision was made during the HOA Head Bangers Open Air 2009.

WELL YOU WERE RIGHT… I guess I found out the hard way… I am sorry if I let the VR fans down… for leaving the band… but you have to see from my point of view… when a band has lots of lineup changes and vocalist quiting… they must have had a good reason for leaving.

Look everyone who knows me knows that I am cool to everyone… but I just could not deal with ROCK STAR’S EGOS and shy conditions any longer… look when you are faced with big egos… you can do one of two things either eat their shit or tell them to fuck off!

With nothing material being written or recorded in over two years… and just milking the tours on old songs for one person’s gain… this was not what I thought it was going to be… well they may come out and say ‚well he was just a hired gun‘ but you have to be paid to be called that!

Call it what you will (quit, fired, split) whatever! At the end of the day it was not working out.

I will continue with BLOOD RED SKIES as we gear up for our new album due for March 2010 as well festival dates in the U.S. and Europe.“ 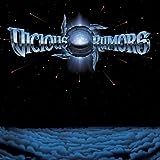