Tracklist „Redemption At The Puritan‘s Hand“:
1. No Grave Deep Enough
2. Lain With The Wolf
3. Bloodied Yet Unbowed
4. God‘s Old Snake
5. The Mouth Of Judas
6. The Black Hundred
7. The Puritan‘s Hand
8. Death Of The Gods

PRIMORDIAL-Sänger A.A. Nemtheanga über das Cover: „So it’s finished, ready, done and dusted as they say. The cover was done again by our by now resident art executioner Paul McCarroll from Unhinged Art. Simple I think you will admit but definitely one that we argued least about through all the years, dark, macabre and beautiful it perfectly portrays the themes of the new album, which I will get into shortly.“

Nemtheanga über die Aufnahmen: „So how does it compare? For the first time I guess we felt a little pressure, before ‘To The Nameless Dead’ we had always been a niche band, a critics choice but following TTND we moved a little more centre stage. Expectations my friends, expectations! Yes it contains rabble-rousers and hooks and choruses, memorable themes and dynamics but also it has darkness in spades. It has grit, filth and foreboding. Dark sweeping tragedy as always mixed with blood stirring defiance!

The recording of course was booked during what has turned out to be one of the worst winters in living memory in Europe. Leaving Ireland at –15 to travel to a –20 Wales, trudging through feet of snow, slipping on black ice and basically having our bollix frozen off for three weeks left me thinking next time I’m going to record in the Bahamas and fake all this grimness. For good measure I got what looking back must have been swine flu recording the vocals. In fact some I can’t remember recording, I was so out of my head on painkillers and energy drinks. Suffering for your art is over rated believe me.“ 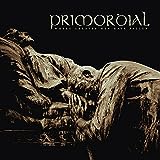