„We have come to an end. After almost two years of touring we have now reached the twilight of the thunder god. Ruisrock in Turku, Finland officially marked the very last show in support for our latest album. We’re still doing a few selected off shows though. We’ll be making our very first appearance in Japan at Loud Park Festival in October. And early next year we’ll be performing on the high seas at 70,000 Tons of Metal.

We’ve had an amazing time on the road supporting this album. Got to tour with many great bands and met loads of awesome people. There have been highs and lows. Highlights include our first tour in South America, performing in Beijing, Taiwan and India, and fulfilled a long time dream by sharing the stage with the almighty Slayer.

We want to thank our loyal friends and fans for the support. Thanks to our crew who has been putting up with us for so long. Thanks to our management and label for covering our backs and everyone else who have been involved in some way, big or small, in bringing us to the far reaches of the world.

We’ve taken the first steps towards the new album but there is much to do. We’ll try to keep you updated on the things going on in the Amon camp as we lock ourselves away to write this new album. Stay tuned.“ 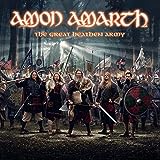 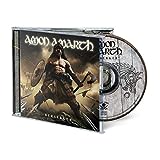